Article Update: You can now purchase these via our Online Store over at this address

When I was a child I was sometimes left with my grandparents who lived on the coast in Liguria.

I must say that I did not happily accept the separation from my parents because, being the last of three sisters, I was always afraid of being dropped to create a little breath in our crowded family menage. Fortunately I could count on a very cozy grandmother, mildly subversive by nature, that could distract my transitory sadness with interesting dining options. Freshly baked focaccia, beaten eggs, baked olives and fried fish were the allies with whom my grandmother Lydia made the separation bearable.

In addition to her simple but tasty cuisine one of the most vivid memories that have stuck in my mind are the folk remedies that she used to relieve aches and ailments with that inevitably rose up in the family.

A fairly bizarre one I had to try was imposed when I contracted the most humiliating of the exanthematous diseases for a child: mumps. While fever went up and my neck was transforming into that of a bodybuilder, a cylinder starting from my shoulders directly connected with my sore ears, my grandmother did not even think about calling my mother: she put in place the therapy her mother would have adopted in similar circumstances at the very beginning of last century.

She ran to the pharmacy and bought some “Ittiolo”, a kind of black, sticky and smelly tar that she spread on my aching ears and covered it up with a sheep wool piece of cloth. Sheep wool. Of course the wool comes mainly from sheep but that material seemed to come directly from the bleating animal without having undergone any type of transformation: rough and smelly it was tied over my head. There was no way to convince my grandma to consider any modern treatment and preserve my tender flesh from that punitive scourge.

Another mysterious remedy, equally curious and smelly, was the sulfur cylinder. She always kept at least one pair in the bathroom cabinet and then she used them whenever the grandfather accused neck or back pain.

To me they looked like big yellow chalks and I planned many times to still them to draw on the sidewalk in front of the house a huge “Pampano” map (a game in which kids competed in jumping on one foot between squares drown on the courtyards floors ) but being still short I’ve never been able to realize my project. 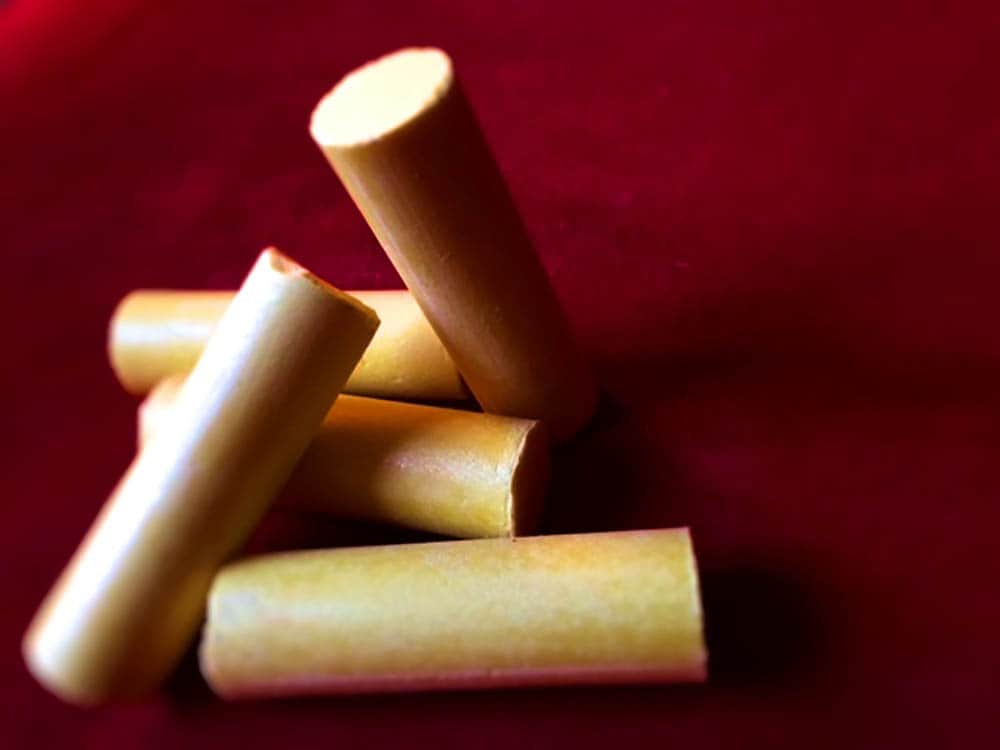 The grandfather instead, because of efforts between hunting and fishing, was always in need of some pampering and sometimes he lay down on the bed in his undershirt to have his back massaged by my grandmother with the famous cylinder.

Now you should know that the sulfur cylinder was consider a remedy only in Liguria and lower Piedmont: in the rest of the nation was practically unknown. Today, the power of globalization, you can find it on banquets of natural products in certain markets but any Ligurian pharmacy still sells it at a ridiculous cost (one euro a piece): the pharmacist will give you the number you want by pulling them out of a box and wrapping them in paper, with extreme care, one by one as they were fresh eggs, to prevent breakage.

Believe me it’s like jumping back in time!
Anyway, my grandmother, used to placed the cylinder in the fridge for a few minutes to reinforce its power and then roll it with the palm of her hand on the sore back of the poor grandfather: after a few seconds you began to hear it crackling and in some cases with a distinct noise the torch was splitting in half.

The scene was quite impressive: in the twilight of the bedroom, just below the image of Jesus whose eyes seemed to check me out in every single corner, it seemed to me that my grandmother had made a sorcery and that the sulfur crayon had cast out the devil from my grandfather‘s body.

The explanation is way simpler: it seems that sulfur attracts negative electrostatic electricity present in inflamed areas and that the contact with it relieves the pain in a short time.

In popular tradition, the cylinder was and still is, used for neck pain, air strikes, joint pain, cramps and contractures and I recently discovered that in South America, especially in Peru, it is a popular remedy for the children nightmares.

A few years ago I started o be interested in natural and old remedies for minor pains and problems; of course the sulfur cylinders became an inescapable item to have in my home pharmacy and I soon started to offer them to friends.

As a result each time I go to visit my Mom, who now lives on the coast, I buy a good supply to be able to peddle them to my female friend because at the end of the day none of them can resist the temptation to act, from time to time, as a real witch.

Update: You can now purchase these via our Online Store over at this address