Villa Olmo and my ex-boyfriends paintings

While my husband was telling his tale I noticed on one of the walls of the place a painting that seemed familiar to me. The thing that struck me is that the painting which has a clear reference to a famous canvas (see bellow) from the artist Pelizza da Volpedo called “Il quarto stato” which is a key piece located at the new Museo di Arte Contemporaneo of Milan that we will highlight in another ingredient article. 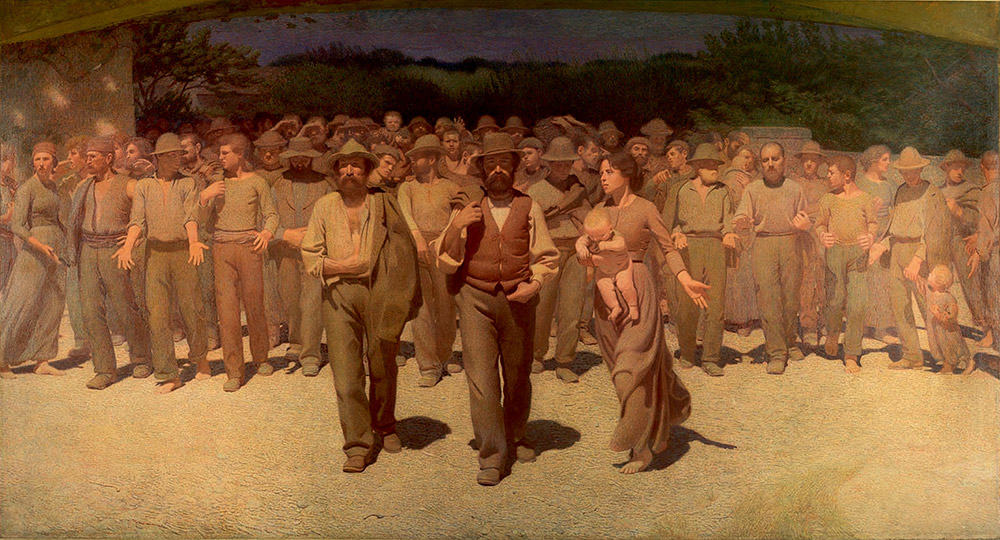 In the painting the central figure was substituted with the image of a person that was quite familiar to me as well as the author of the painting in question: my ex-boyfriend Jonathan Guaitamacchi that I use to date during the days that I was studying Art at the Academy of Brera! By a strange coincidence the next day I received from him via email an invitation to see his exhibition at Villa Olmo in the city of Como.

Here are two of his paintings that are at the exhibit. Along with a link to his web site:
Web site: http://www.jonathanguaitamacchi.com/

The exhibition is housed in one of the most prestigious villas of Como, Villa Olmo, a magnificent Neoclassical residence commissioned by the Marquis Francesco Odescalchi, a prominent personality during that era, a well traveled “illuminist” of the late ‘700 who hired the architect Simone Cantoni for its construction. The villa was constructed following the precise proportional rules of the aurea section formula with the ambition of representing the progresive cultural atmosphere of the period. Its beautiful elegance goes side by side with the vast lakeside gardens and in my opinion merits a visit if you are in this wonderful area that is Lake Como. 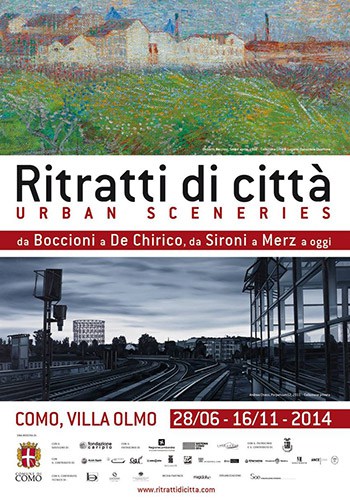 The Exhibition
This exhibition investigates and puts on show more than a hundred years of art, social and cultural history in a show that is the first of its kind to look at the city through the eyes of artists who continue to draw on it for inspiration and to interpret what it means to live there and to share the urban experience itself.

Some works have never been seen in public before and one of the sculptures, the Pietrarubbia Group – il Tutto, was created especially for the exhibition by the great sculptor Arnaldo Pomodoro.
There are over 60 works on show including paintings, sculptures and photographs that take the visitor on a journey from the futurism of Boccioni, Balla and Depero, through the dream world of the metaphysical works of De Chirico, the poetic perplexity of Sironi the architectural abstractions of Soldati and Galli to the post Second World War avant-garde (Cavaliere, Merz, Schifano, Tadini, Adami and Rotella), to the master of “architectural painting”, like that of La Pietra, Cantafora, Ico Parisi and Francesco Somaini and authors such as Fontana, Basilico, Ghirri and Galimberti, thanks to whom photography too becomes a medium of intellectual and poetic interpretation of place. Finally, then, on to the most recent generations of Chiesi to Costa, Guaitamacchi to Presicce and other young artists for whom painting and photography forcefully express the current crisis of the image of the city.

Ritratti di Città
Urban sceneries is a unique occasion of its kind to view a broad spectrum of styles and representations of the city, some analyzing its meaning, some describing visionary flights on its significance and an existential unease in the face of the subject of Urban sceneries on show in Villa Olmo to narrate and mirror the history, the society and the life of the city all through the twentieth century and up to the present day.