Camaldoli Heritage : The white monks inside the snail

Talking about the Benedict hermitage of Camaldoli I’d like to start from the physical heart of the story: the monks cell. The word monk is derives from the Greek word MONOS that means alone or solitary and as you drive up to the site you can realize how strong the will of isolation must have been for these people who decided a thousand years ago to base their tiny community in this area.

The Casentino Region hosts the biggest forest in Italy, a wild National park were you can still meet wild boars, dears and wolfs. I can only imagine how it could have been in 1012 when S.Romualdo built the first small settlement on a piece of land given by a noble man who had a vision of monks dressed in white garments ascending to heaven.

The place was called Campus Maldoli, or Camaldoli.

Romualdo was a wealthy young man from Ravenna who decided to become a Benedictine monk after witnessing his father kill his opponent in a duel, upon which he abandoned community life and dedicated himself to what he considered the true rule of monastic life: hora et labora (pray and work) in silence and meditation.

Both for a practical and a spiritual purpose the monk’s cell were built in a spiral structure to symbolize the spiritual path they had to follow, from the outside to the very center, in a constant, restless search. 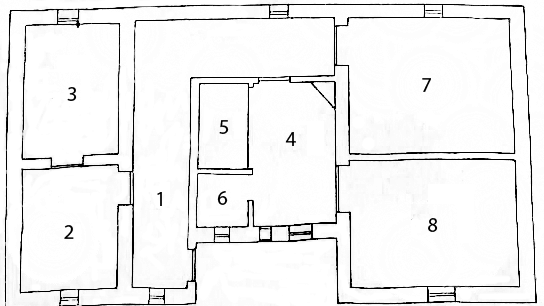 The Casentino is considered a mountain area and can get very cold in winter time. If you follow the cell map you can notice that the center on the monk’s life, the working, praying and sleeping room are smartly located in the very heart of the construction to preserve him from the bitterly cold.

Each cell has, right in front of it, a small vegetable garden surrounded by a wall to keep the isolation even during the working activities. Even the meals were not consumed in public areas but within the cell. These were passed to the monks through the small window overlooking the inner garden. In the ’70 the Church decided to discourage these extreme and drastic forms of spiritual life: now the monks shares much more activities compared to what happened in the past and their cloistered is way less rigid than before.

In fact I was pretty surprised to find in the monastery book store a lot of publications regarding yoga and all sort of meditation which obviously reveals an unexpected openness to all form of spirituality.

The visit at the Camaldoli Hermitage is pretty quick and apart from the S.Romualdo’s cell, you can also visit the quest quarters and the church which is a surprise in itself: having being renovated in the XVII century, after a devastating fire, it has been restyled in the most exuberant Neapolitan baroque, with a jubilation of curves and gold that completely betray the spirit of the place.

Visitors are not allowed to over pass a gate that ensures the privacy of the eight monks still living in the heritage but you can look at their tiny houses, silent and full of grace that make you crave, even for a few seconds, to leave the carousel of life and turn to the center of the snail.