The Cathedral of sugar: The Milan Duomo

Milan is regarded by the Italians as a kind of large abnormal cell: if the rest of the country is worldwide famous for being the center of the good life, in this city you come to work, you flee from it on weekends or whenever you get a chance, and you abandon it as soon as you reach a pensionable age, because Milan despite the fact that it is immersed in humidity and fog, it is definitely not a town for the arthritic.

So in this capital of efficiency and work one asks himself how could it be possible that such a beautiful cathedral seemingly made out of sugar when viewed on a snowy January evening lights with a quasi fairly like presence.

Legend has it that Gian Galeazzo Visconti, Duke of Milan, received a nocturnal visit from the Evil One, and was asked to build a church in his honor. If such a request was not respected he would have his soul stolen for eternity. And as we all can imagine, a soul in the hands of the Devil is bound to have a nasty end. So Gian Galeazzo, with the approval of Archbishop Antonio da Saluzzo started the construction of the cathedral in 1387 to distance himself from the threats of the devil, proceeding to build a grandiose project, out of rose colored marble, a precious stone that was carted in from the quarries of Candoglia in the Ossola Valley. The Lombard architecture of the period typically revolved around the use of brick which was a cheaper and easily obtainable option. In addition, the Late Gothic style characteristic of the cathedral, which is of a more Nordic tradition and not common for Italy at the time along with the presence of so many grotesque and monstrous images must have sparked the popular imagination to justify the intervention of the devils in the origin of its conception.

I have recently discovered of a typical Milanese saying that dates back to the Duomo period. When somebody wants to say that they did some work for free in Milan they say “A Ufo”. This word has nothing to do with aliens but just goes back to the times when, at the behest of the same Gian Galeazzo Visconti, the slabs of marble from the quarries north of the city that were carried through the canals to the site of the Cathedral, were marked with the words Ad Usum Fabricae which meant that they could go through without paying taxes imposed on all other commodities. This became the acronym for the system forerunner of the “tax free“ which is of common use and derives from such a long time.

The history of the Cathedral of Milan, is closely tied to the history of the city itself to the point that the facade was completed by Napoleon Bonaparte in 1813 at the same time when the French influenced the definition of the urban structure of the city. Prior to that time it had been used the facade of the existing Santa Maria Maggiore, which was dismantled and rebuilt with every progress of the new church.

The Milanese to indicate something that has no end typically say “its like the Duomo factory!” In fact, at the beginning of its construction, Gian Galeazzo founded the “Venerable Fabbrica del Duomo”, an institution that still exists, after six hundred years, and which is in charge of all the restoration and maintenance of this huge complex, including both the exterior and interior along with the 3600 statues.

Obviously the style of the cathedral can not easily compare to some other wonderful works, which are more refined and probably of a higher stylistic presence in our country but the Duomo, with its crowd of saints and gargoyles that seem to appear in a surreal space, are something really magical.

Way above at the top, roughly 108 feet above the ground, the “Madunina, tuta d’oro e piscinina” (the tiny Madonna made of gold), placed to protect the Milanese was evoked in their old dialect songs in a diminutive manner. La Madonnina is instead an amazon of a figure with its full height of four meters and all covered with gold,but perhaps due to the fact that seen from the bottom and partially concealed in the grey mists of the city, she is always seen as something small and far away, but with that ability to guard and oversee everything, sort of like that little good girl to who you can confine what you carry in your heart.

Now speaking of measures, let me give you some numbers so you can get an idea of the proportions of this immense cathedral :
1. The church is 158 meters long and 93 meters wide
2. It has 135 spiers that are pricking from the roof
3. 52 columns which are 24 meters high with a diameter of 3.40 meters hold up the structure.
4. The main organ inside is composed of 16,000 pipes making it one of the biggest in Europe.
5. To go to the roof of the structure you can either take the 500 steps (or you can also go by elevator.)

Two additional curiosities: The most important religious object which is located inside the church is the nail from the cross of Christ. The Middle Ages where without a doubt the “golden era” for the cult (and commerce!) of religious artifacts: the sanctuaries would host the most venerated of objects which would then become destination of pilgrimage from the devotees. The presence of such objects granted the church a secure flow of prestige, protection and donations.

Preserved inside a special box suspended above the main altar its presence is highlighted from all around the church by way of a red light that points straight at it. To remove the nail during the religious holiday called “Invenzione della Santa Croce” on the 3rd of March and show it to the flock the archbishop uses a curious mechanised elevator contraption called “nivola” which dates back to the sixteen hundreds.

The second one is the sun dial which is located close to the entrance of the church and consists of a thin bronze inlay on the floor. Off to the south wall and at a height of 24 meters there is a small hole through which the midday ray of sunshine projects itself on the floor slab and indicates the appropriate time of day. Up till the 18th Century all the city activities were regulated by way of the sun dial and the church bells which would chime and indicate the appropriate time to the city dwellers.

The Duomo offers so many interesting highlights and special moments if one is lucky enough to visit while the church organ is being played undisturbed despite the continuous flow of tourist. If you have the chance to visit don’t forget to look for the statue of flayed San Bartolomeo on the right side of the church: a work of Marco d’Agrate which dates back to 1562 and represents the martyr Saint with his own skin casually draped over his shoulder like a bath robe. The statue which was originally placed in the church yard was then transported inside because its sight terrified passers-by. Not to be missed! 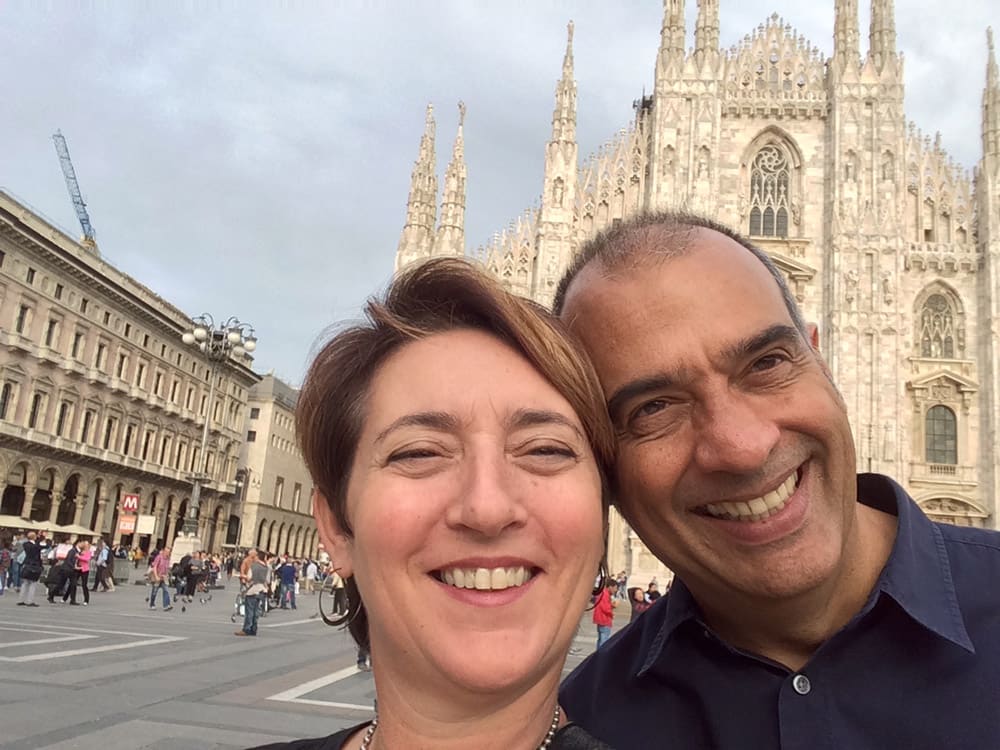