The Bernina Express train to Saint Moritz: fashion on the lifesize railway toy

I don’t know which one of you had the chance, as a child, to play with one of those little trains mounted on a miniature railway line, set in a couple of square meters maquette. Very few I guess because in countless cases, adults love them so much that after putting together the complex toy, they would forbid their children to touch them. At least this is one of the childhood sad stories that Nazim largely used to make inroads into my young heart in the early days of our relationship.

I have always been fascinated by small scale reproductions of any kind of item and the toy train is certainly part of this category.

For years I promised myself to do the Bernina Express train tour but then, for one reason or another, I always postponed the trip. I’ve been always very curious because it is a historic train, a tiny descendant of the Orient Express but unlike its bigger ancestor, it runs a much smaller stretch and is much less demanding in terms of time and costs.

Perhaps not everyone knows that I am a professional make-up artist and the opportunity arrived this summer when a client proposed me shooting job on this little mountain train. 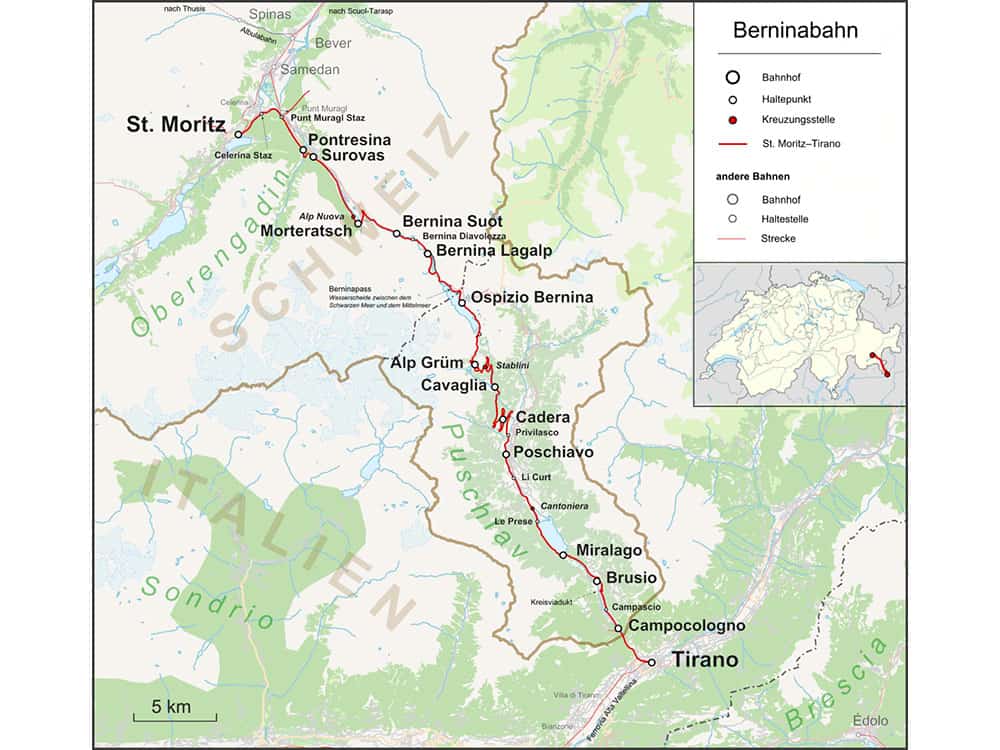 The plan was to reach the town of Tirano (in the north of Italy, just 2 km away from the Swiss border) from where the train leaves, the afternoon before the shooting and then the next morning, after having prepared our 2 models, we would have taken the 11 o’clock train. The shooting was supposed to start already at the station in Tirano then continued on the train and once we reached the Bernina Pass we would have got off and taken the latest photos for the brand’s campaign on the spot.

The train route continues to Saint Moritz, the famous Swiss ski village, but we would have caught it on its way back to return to Tirano.

The Bernina mountain pass is located at 2253 meters above sea level and the surrounding mountains normally preserve snow-capped peaks all year round: a marvel for us who arrived from Milan immersed in the worst heat of the year that reaches 40° Celsius and the perfect location to take winter clothing pictures in the middle of summer!!!!!!

The railway was built between 1906 and 1910 and it was one of the first railway lines designed for electric traction.
As we said when it gets to the Bernina pass it reaches quite an altitude and is, therefore, the highest natural-grip railway in the Alps, as well as one of the steepest in the world (it reaches a maximum gradient of 7%).
Because of the particular route, its construction has cost the lives of many workers who at the beginning of the past century came from different regions in search of work.

On July 2008 the Bernina Express Railway was included in the UNESCO World Heritage Sites, as a technically advanced example of management of the high mountain landscape and as the most spectacular railway in the world.

For those who don’t live close to the mountains, it is perhaps hard to imagine how difficult the connection between the two sides of the Alps could be in wintertime in the old days.
Until the end of the 1800s the Bernina, which has always represented a crucial north-south axis for the transport of goods between Italy and Switzerland, was crossed by couriers daring the savage weather and very often, during the bad season, they had to stop because of the danger and inaccessibility of the pass.

Try to imagine that with the good weather horseback diligence took a good nine hours to cross it!
It was the discovery of electric traction energy for the railway that allowed the birth of the Bernina Express line; in fact, the ambitious project could take shape exclusively thanks to the construction of the nearby Brusio power plant.

In order to overcome the problem of the height difference between the city of Triano and the rest of the route, it was necessary to build nine tunnels, several stone bridges and three overpasses, while at the Brusio station, the engineers of the time were forced to build one of the symbols of the Bernina red train: a double hairpin bend and its helical viaduct. 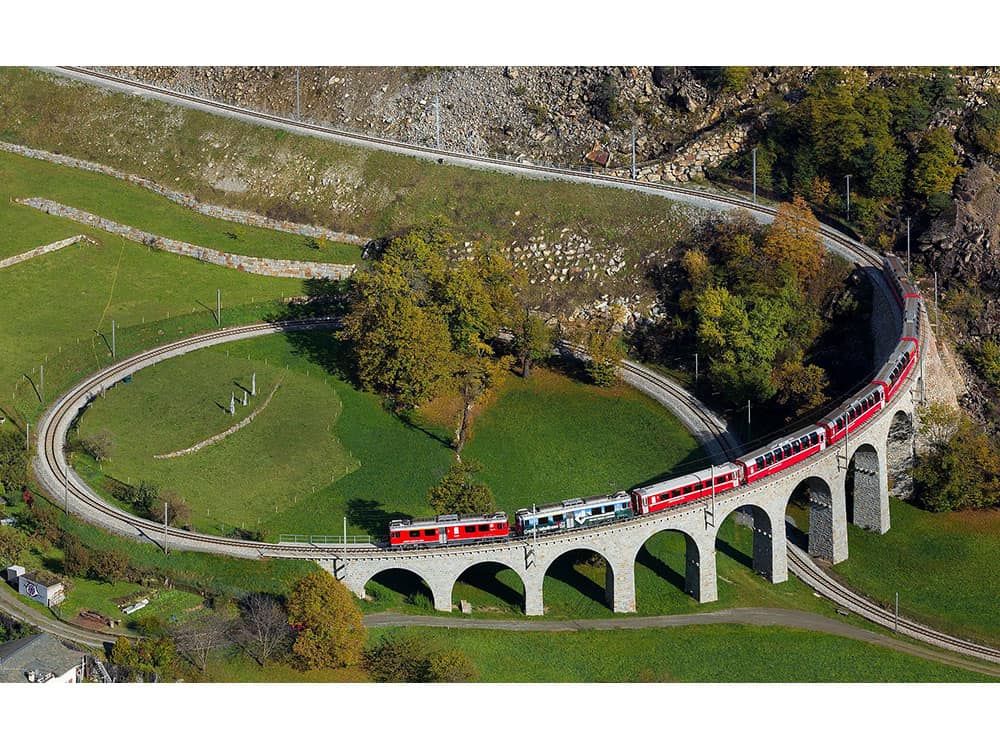 In 1912 the new railway had already acquired an incredible international reputation, in fact, a Japanese engineer named Handa visited Switzerland in search of a reference for the construction of a railway near Tokyo, on the slopes of Mount Fuji. It was carried out according to the same principle as the Bernina railway and it was inaugurated in 1919.

Today only one original carriage remains, with wicker seats and cotton luggage racks that we used as a set for our photos, while tourists can travel the 61 km of the railway in comfortable wagons with transparent rooftops through which they can comfortably observe a breathtaking landscape. The vegetation, the rocks, the alpine lakes, the snow-capped mountains: the train passengers can experience the beauty of high mountains like in a VR movie.

The train suddenly coming out of the short, dark tunnels surprises with a wonderful sight, completely unrelated to the routes that are normally traced by flat land railways.
The mountain is usually a prerogative of sportsmen, of those who do not fear the cold and fatigue and it is always tiresome for those who dislike undergoing the discomforts of alpine sports.
Here, the Bernina train is the perfect solution for all those who, while loving nature, have decided not to suffer from it

Once again I have to thank my work that makes me discover the beauties of my country which, as I have already told you, has the largest number of UNESCO sites in the world (54) !!!

So don’t miss the ride on the splendid panoramic cars of the Trenino Rosso, a small jewel of civil engineering, ancient, glorious and in perfect health !!!!