Here we are at Christmas in this difficult 2020 and to compensate for the inability to reach the family due to the lockdown rightly imposed during the holidays, we took refuge in one of the most rooted traditions of Christmas gastronomy: tortellini with their relative meat broth!

We can find the first traces of this ancient recipe, which probably originated in a poor environment to “recycle” the leftover meat from the table of rich nobles, in a parchment of 1112, as well as a bull of Pope Alexander III of 1169. You can easily imagine how much in a thousand years this dish has entered our DNA! 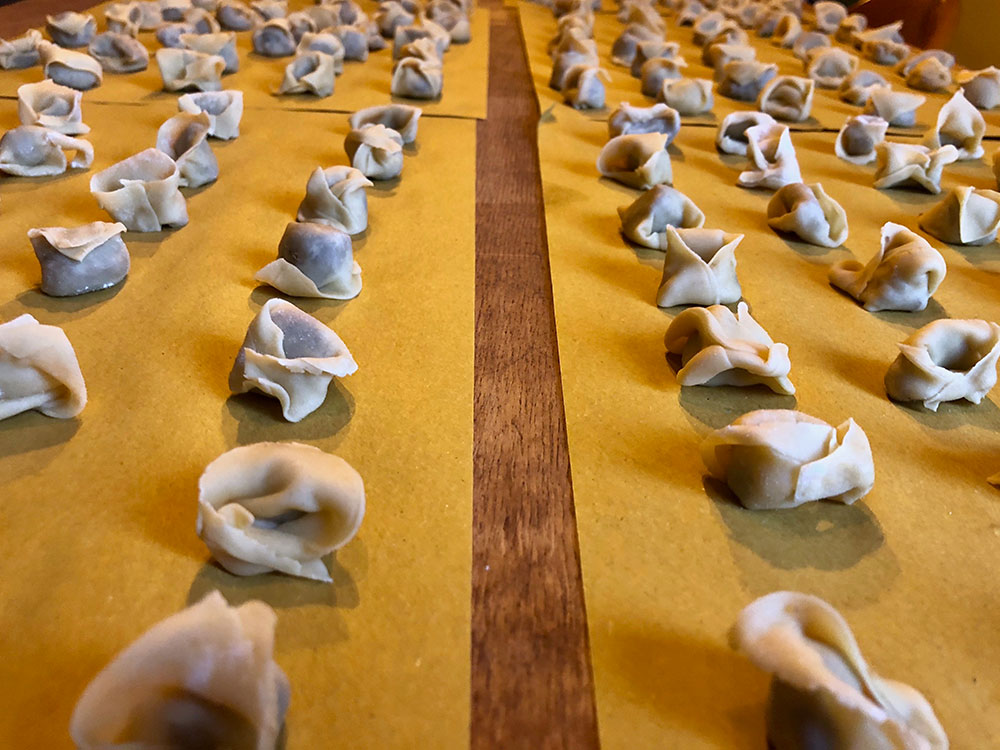 Many legends tell of the birth of this stuffed pasta but the most poetic is undoubtedly the one that gives birth to Castelfranco Emilia, a country historically disputed between Bologna and Modena (Emilia-Romagna), by the owner of the Corona inn, who, peering through the keyhole of the room of a noblewoman who was his guest, he was so impressed by the beauty of her navel that he wanted to reproduce it in culinary preparation.

There are many variations of the same dish and in fact, every family has its recipe that is handed down from generation to generation. I remain faithful to my mother’s because from the moment you start preparing the meat stuffing at home, an intense aroma spreads that immediately brings to mind very distant and vivid memories related to childhood and much less hasty preparations for Christmas than the current ones. When I was little, an impressive quantity of tortellini was produced which then on wide trays were transported to the large house in the mountains together with the suitcases, the ski equipment, the whole Parma ham to be sliced ​​with a knife, the dog, the wolf fur of my mother and me and my sisters’ satchels crammed with books and homework for the holidays. Honestly, I never understood how my father managed to stow all this in the only car at our disposal (a small Fiat), but every year this enigmatic maneuver succeeded miraculously.

Once they arrived at their destination, the tortellini was laid out in perfect geometry to facilitate counting (each plate of tortellini in broth according to my mother’s Calvinist measurements had to contain 12) on a large bed placed in the attic room facing north, cold as hell and where no one wanted to sleep. In the evening, after a long day of skiing, my mother went up to the room that still refers to today with the term “the tortellino room”, took the right amount, and put them to cook in the meat broth for dinner. I simply adored them: I would have eaten no more than 12, 24, 36, 1000. I discovered much later how smart my mother was in giving us just enough of a ration: this is the real secret of desire.

Well, I will try to explain to you in detail how to get a good tortellino hoping that by eating them you can experience some of the consoling joy that I, even today, feel every time I bring one to my mouth while it floats in its fragrant broth. 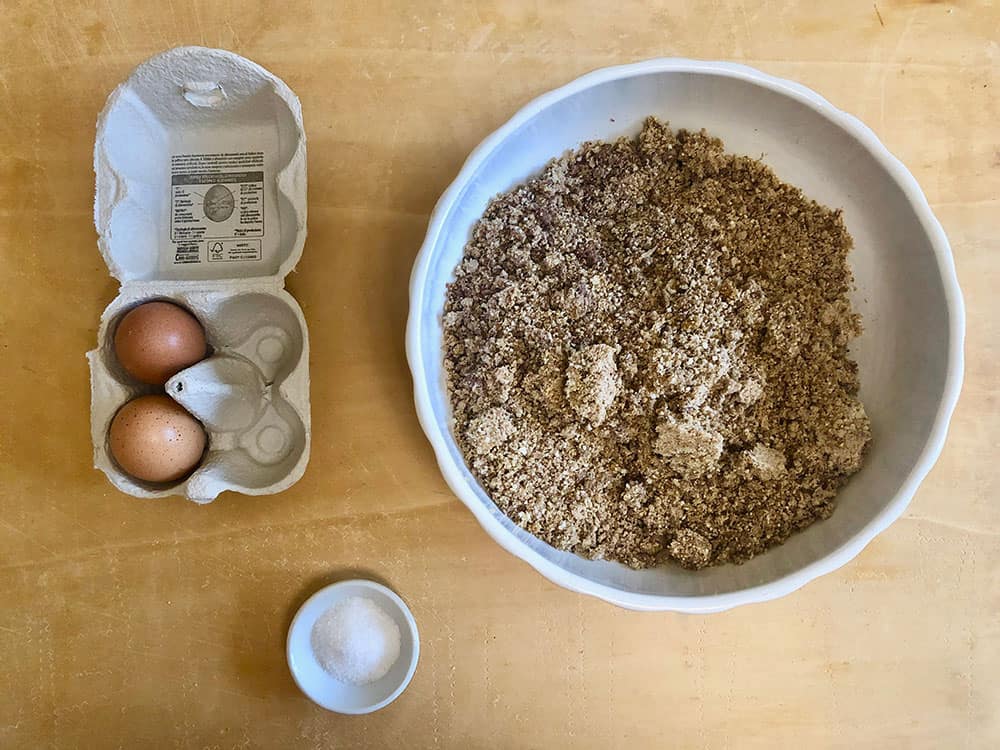 Sauté celery, carrots, and well-chopped onions in a few tablespoons of EVO
(Extra Virgin Olive) oil and let it go until the vegetables are soft. Brown the meat until it has changed color, add salt, pepper and add cloves and cinnamon (these spices are very important precisely because the dish has a medieval origin but I have to leave a hint in the filling, do not overpower the flavor of the meat so be careful especially with cinnamon because it is not a Christmas biscuit! !!) Over high heat pour the wine and let the alcoholic part evaporate. At this point, lower the heat and cook for about 1 ½ hour, covering and uncovering to prevent the meat from drying too much. 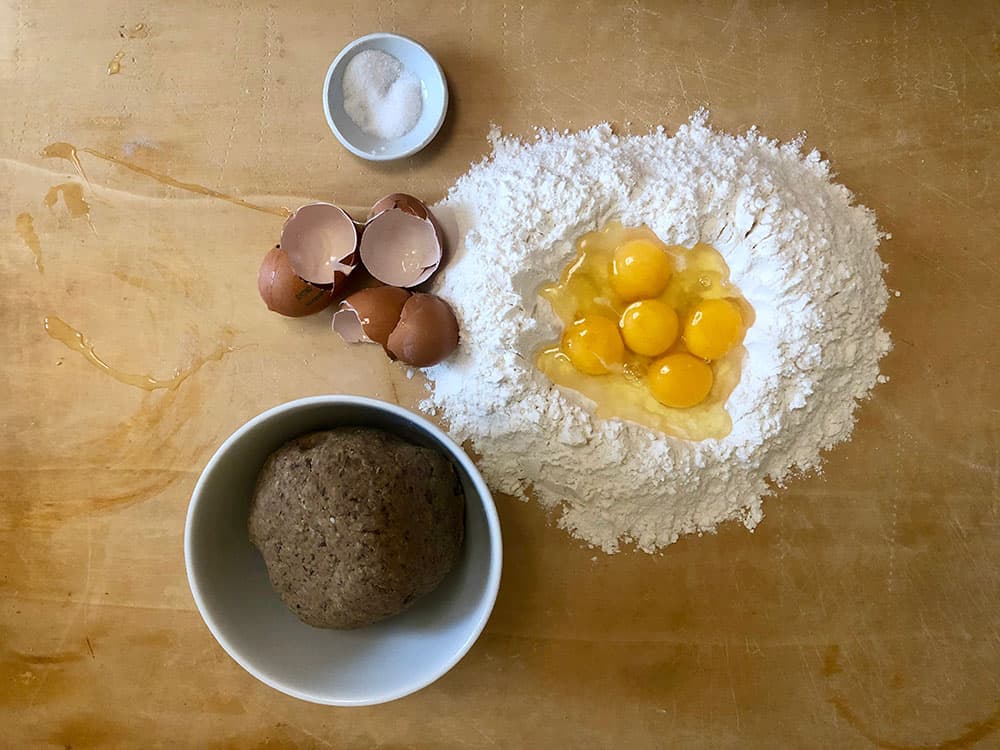 When the meat is ready, remove it from the casserole, let it cool, and then finely chop it with the chopper. Filter the cooking sauce and add it to the breadcrumbs so that it absorbs it all. Mix the minced meat, the breadcrumbs, the Parmesan, the eggs, salt, pepper, and nutmeg. Work the dough with your hands until you get a ball (it will be about 6.50 hg). If the dough is too hard, add one or two tablespoons of broth (or water) without exaggerating because it must be very compact. Put it in a covered bowl in the fridge and proceed with the pasta.

Make a hill with the flour on the work surface and create a hole in the center. Break the six eggs inside the hole, add the salt and with a fork gradually incorporate the eggs into the flour. Once you have created a batter, work the dough with your hands for a long time until you get an elastic and uniform dough. Wrap the dough in plastic wrap and let it rest for half an hour. 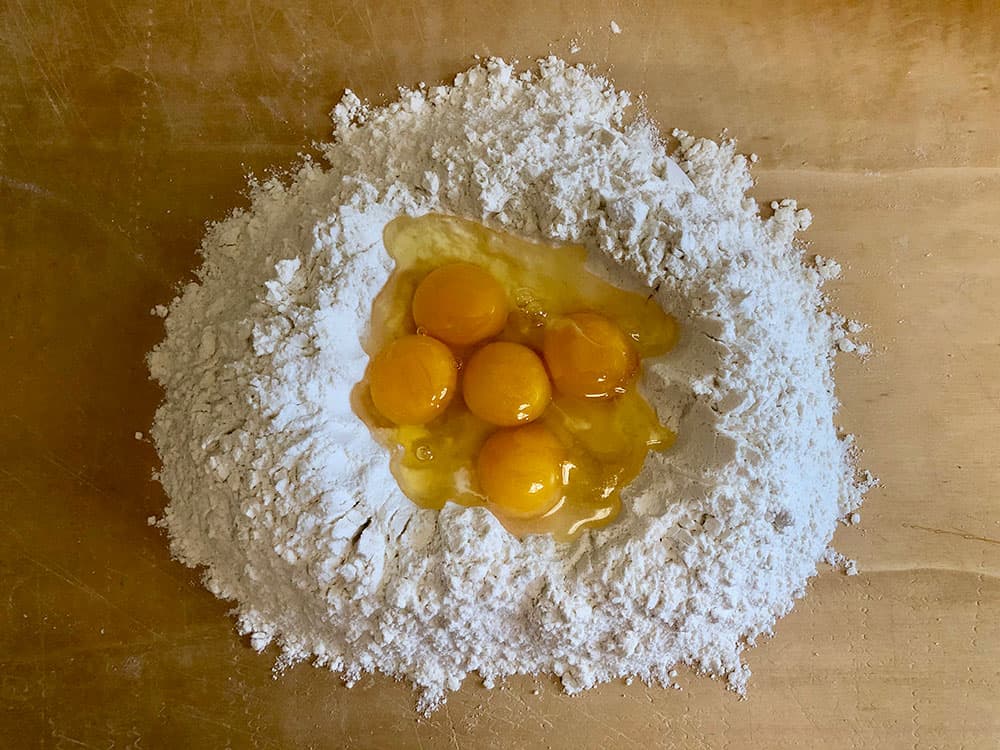 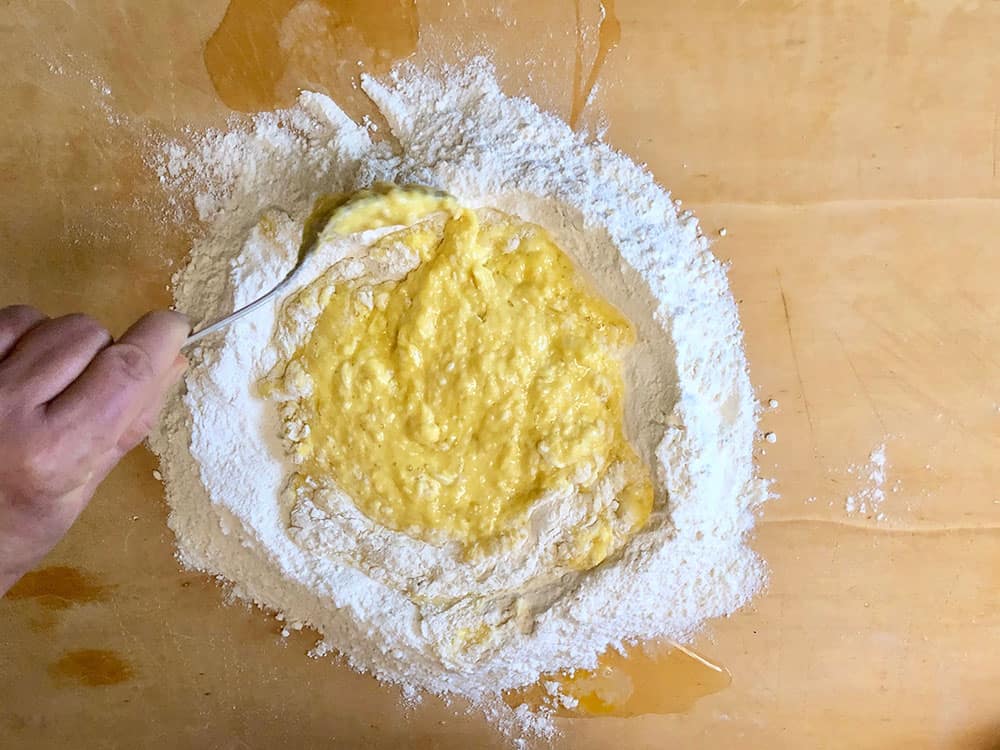 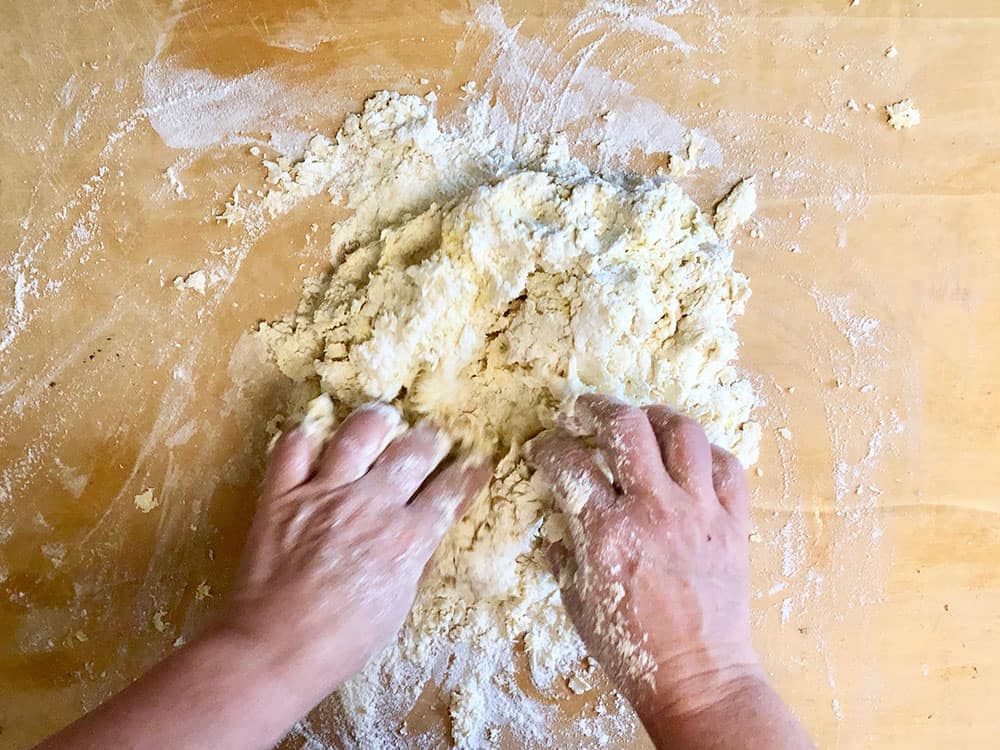 Now that you have your two components ready, you can proceed to the production of tortellini. If you are very skilled you can roll the pasta by hand if you want to make your life easier, get yourself a pasta machine (purchasable on our Casachiesi Shop online) 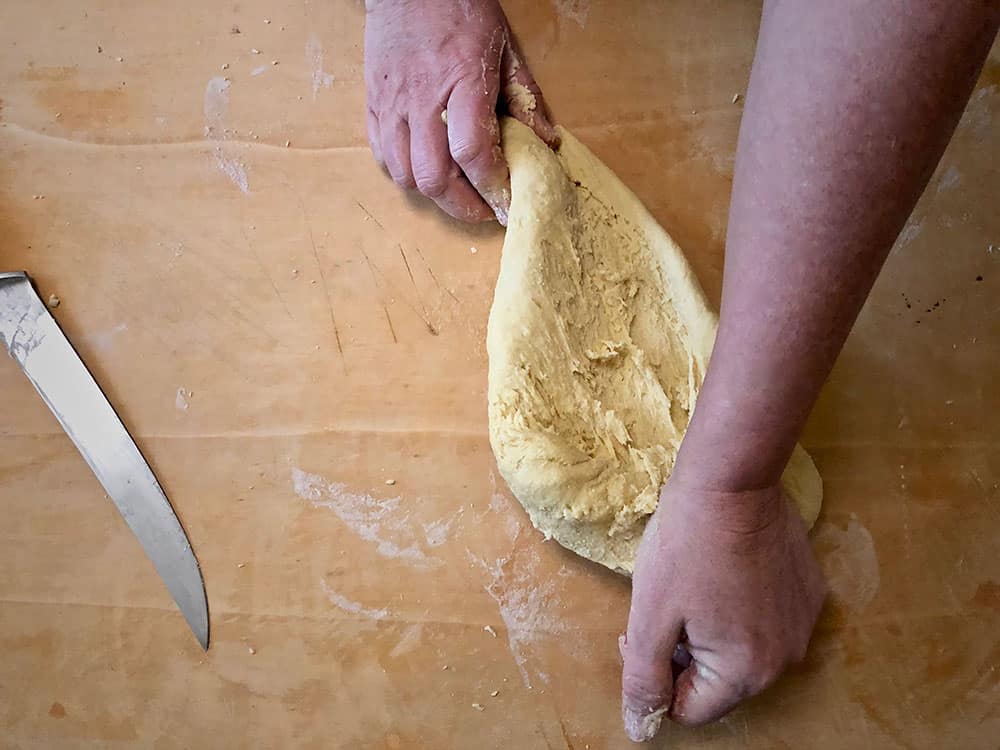 Cut a piece of dough (about 1/6) flatten it slightly and pass it through the widest slot of the machine; double the dough and repeat the operation two or three times to compact the dough. 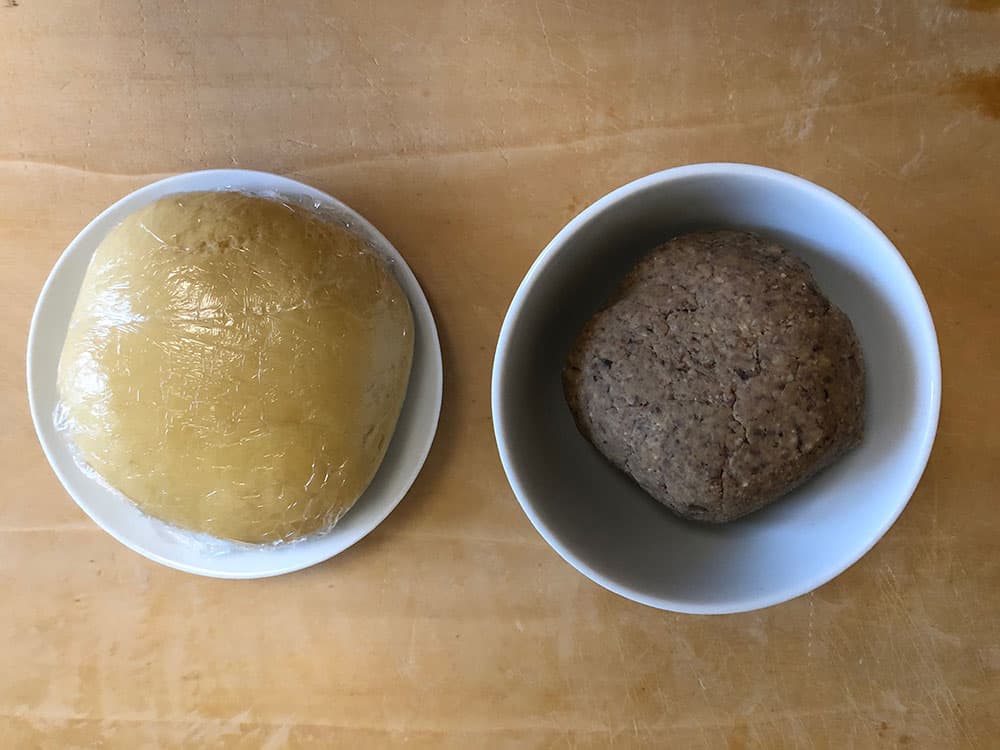 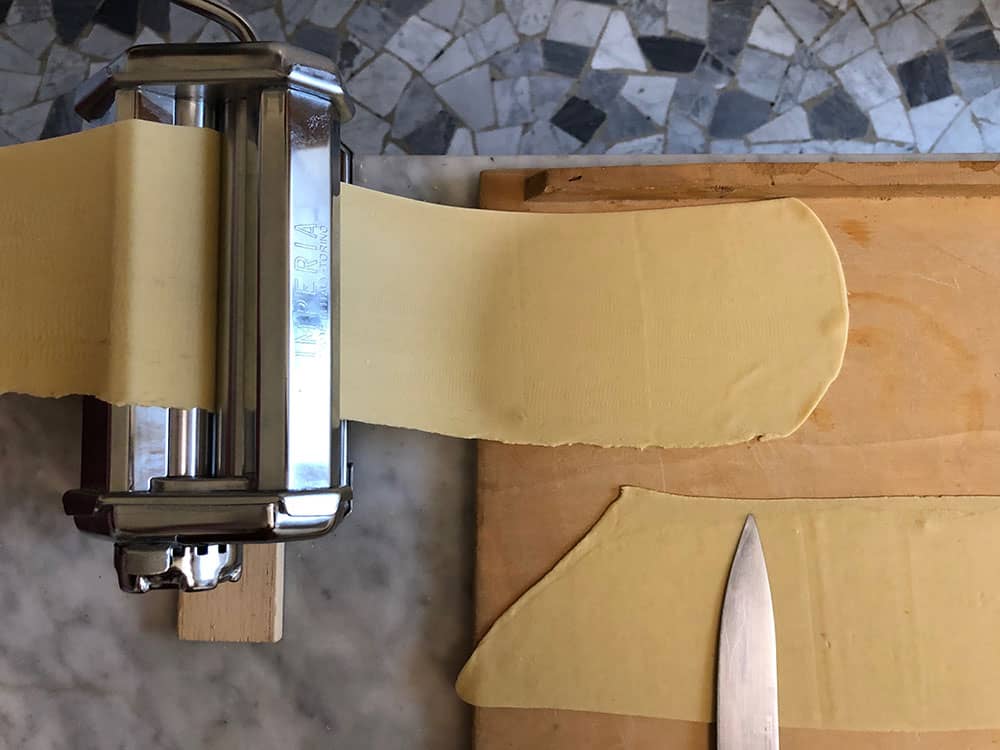 Proceed always tightening a little more so that the dough becomes thinner and thinner until it reaches the smallest thickness. At this point, you will have a perfect pastry to make refined tortellini. Be careful not to prepare too many sheets of pasta at the same time, especially if you are working on it on your own because the pasta dries very fast and it makes it very difficult to seal the tortellini. 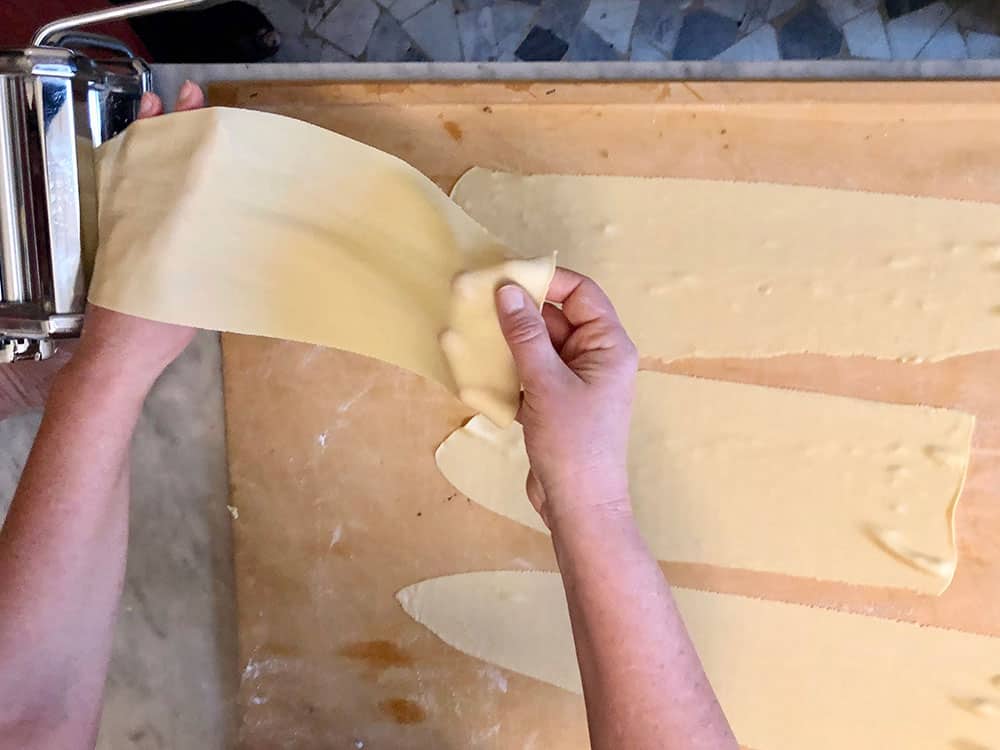 Cut squares of about 5 cm x 5 cm and place a ball of filling at the center of each square (it takes a little practice, try to make some and you will immediately see what the proportion between the sheet of pasta and the filling must be: too stuffed overflows in the closure, little filling makes the tortellino tasteless). Overlap a corner of the dough on its opposite to create a triangle, press the dough very well on the two open sides so that they stick together, and then turn the dough of the two outer edges (think of the Grace Kelly handkerchief that ties under the chin) and turn the remaining cornerback and…. Voilà, here is the navel. 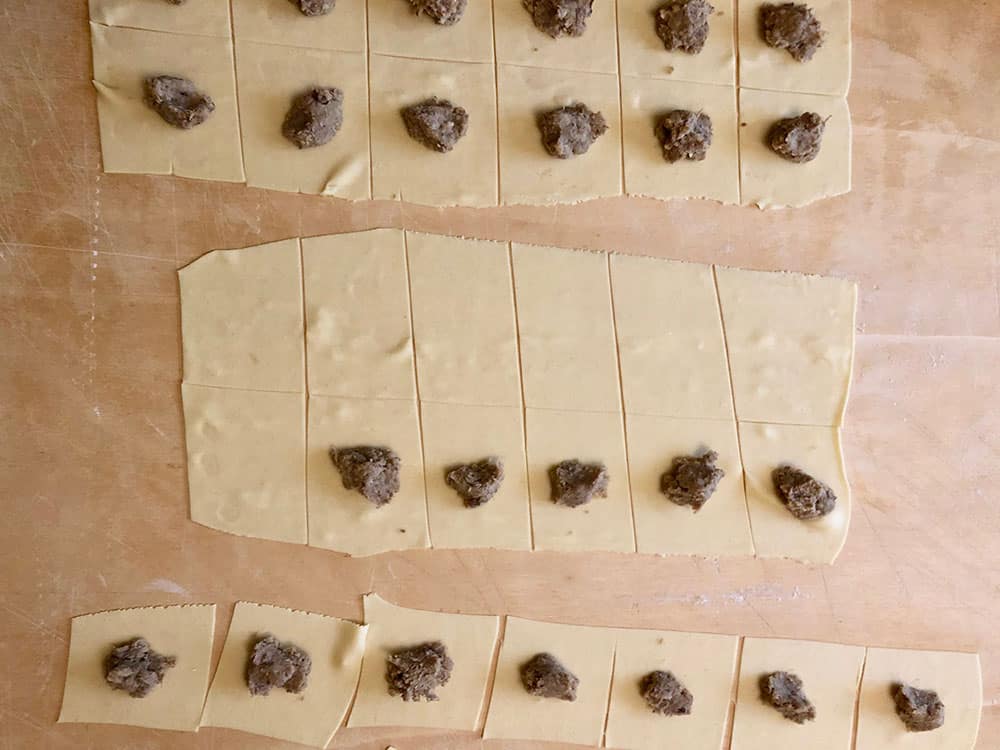 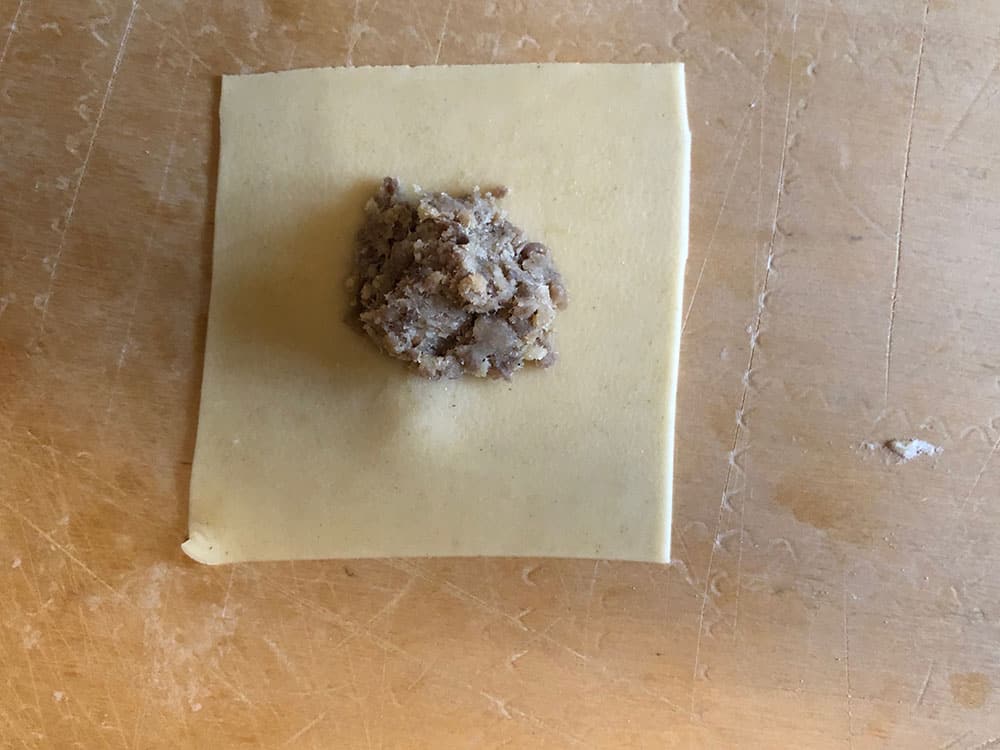 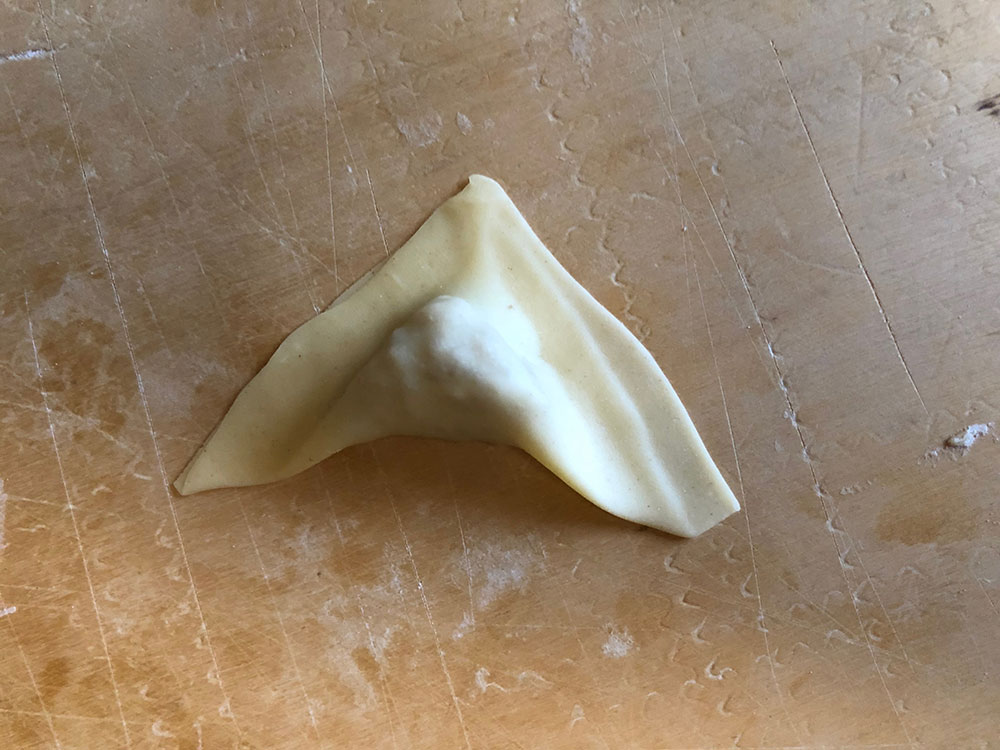 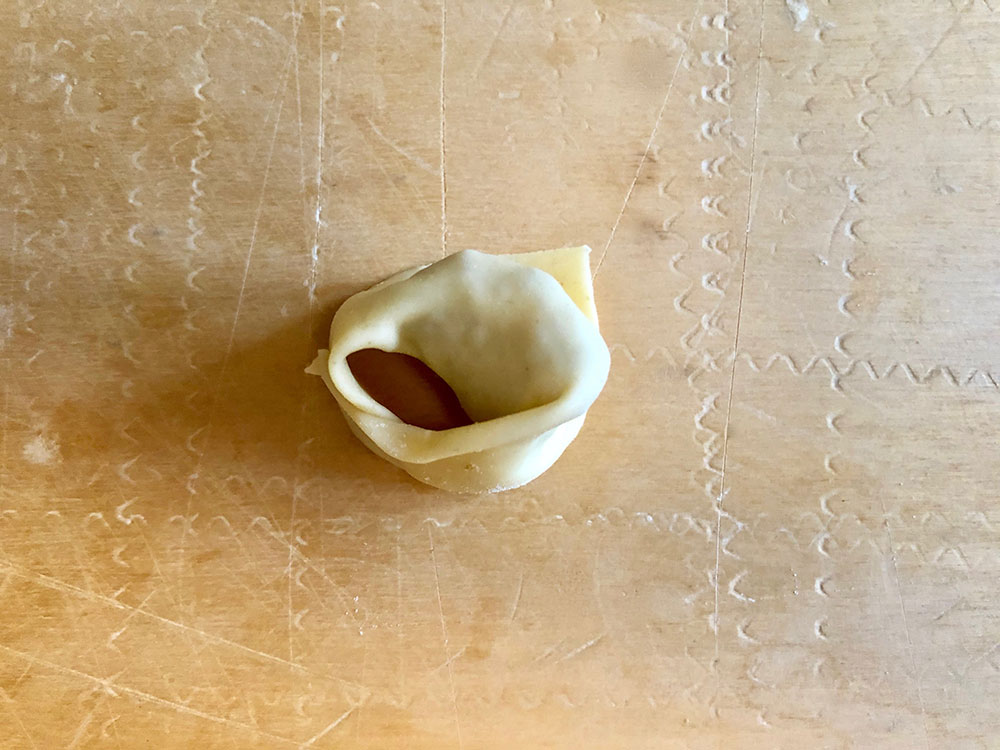 With these quantities there should be about 250 that said this seems an exaggerated figure but being a rather long job you can give some, freeze a part and why not put more than 12 for each portion in your boiling broth? (Cheat on my Mom’s rules!)

As I told you, they should be boiled in meat broth (carrot, onion, celery, two bay leaves, two juniper berries, a clove, 10 peppercorns, muscle, beefsteak, tail, and partridge but maybe we will talk about another time !!!) for a few minutes until the “knot” of the tortellino is cooked and soft. If you want to consume them “peasant style” add 1/2 glass of red wine to your plate: I don’t like it but Nazim is crazy about it! Oh, I forgot: if you want to freeze them, keep them separate on a tray. When they are frozen you can put them in food bags.